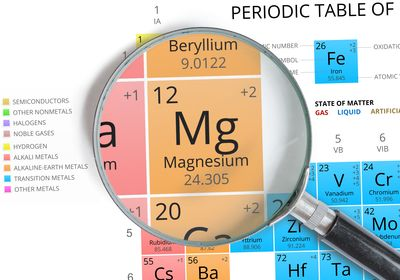 Magnesium is characterised by other unique properties due to which it has a use for the other industry sectors:

Magnesium or its alloys are available in almost all the common forms in which metals are commercially used. Practically pure magnesium, 99.8 per cent, is supplied as ingot and stick for remelting, and as powder, ribbon, wire, and extruded and rolled strip. Magnesium alloys are produced in various forms including casting, sheet and plate, shapes, forgings, bar, and rod. Both standard structural shapes and sections of special design are made by the extrusion process.

Sheet is fabricated into many different articles by drawing and by spinning. Magnesium alloys are especially workable by hot forming methods. Structures in the alloys are readily assembled by welding and by riveting. The excellent machinability of magnesium alloys has been mentioned. Parts in the alloys can be machined at higher speeds and at lower costs than in most other common metals.

Different combinations of mechanical properties may be obtained by suitable heat treatment of some compositions. The endurance limit of cast magnesium alloys ranges up to approximately 14,000 pounds per square inch (≈100 MPa) and of the wrought alloys up to 18,000 pounds (≈125 MPa). The modulus of elasticity of magnesium alloys may be taken as 6.5 million pounds per square inch (45 GPa) and the modulus of rigidity as 2.4 million pounds (16 GPa).

As in the case of aluminum, savings may be affected in the production of parts by specifying magnesium alloys rather than steel although the later costs less on a pound basis. The volume of metal in a part may be substantially the same irrespective of the material used, however when comparing metal costs, the price per pound of magnesium should be divided by the ratio of the specific gravities involved. For steel, this ratio is approximately 4.2 and for aluminum 1.6.

In the utilization of castings, somewhat thicker sections may be required in light alloys than in steels in order to compensate for the difference in tensile strength. At the same time, the thickness of sections is often determined by foundry limitations rather than by the mechanical requirements of design. So, the same thickness of section in a magnesium-alloy casting (as in steel) may afford enough strength for a particular purpose.

The economy arising in machining magnesium alloys may offset an unfavorable price relation with a material which costs less on a volume basis but is difficult to machine. Also, the fact that a die-casting may be made of a magnesium-base composition and used in place of another material which is not suitable for the die-casting process may lead to substantial savings.

The common magnesium alloys employed for casting purposes usually contain varied percentages of aluminum, manganese, and zinc. Aluminum has been the predominant alloying element with magnesium. The maximum aluminum content does not normally exceed 10 per cent. Calcium may be added in small amount (about 0.10 per cent) to some alloys for particular purposes. New alloys developed during late years contain rare-earth metals and zirconium. These provide increased resistance to creep and stress-rupture at elevated temperatures. Nearly all the casting alloys may be heat treated to improve the mechanical properties, a notable exception being alloy M1A. For many years, RZ5 alloy has been the preferred material for helicopter transmission casings due to the combination of low density and good mechanical properties. More recently, however, the requirement for longer intervals between overhauls and hence improved corrosion properties has caused manufacturers to reconsider material choice. In the past, RZ5 was generally used for gearbox casings but many new programmes will use WE43 instead including the main rotor gearbox castings. For this application, an aluminium transmission would have been used but for the exceptional corrosion resistance of WE43. The Eurocopter EC 120 and NH90 helicopters have also flown with WE43 transmission casings and WE43 is specified for the Sikorsky S92. Further applications for WE43 will go ahead in the future both on new programmes and also to replace RZ5 on older helicopters. RZ5, ZRE1, MSR and EQ21 alloys are widely used for aircraft engine and gearbox casings. This will continue although it is likely that WE43 will be used increasingly for its corrosion and high temperature properties. Very large magnesium castings can be made, such as intermediate compressor casings for turbine engines. These include the Rolls Royce Tay casing in MSR, which weighs 130kg and the BMW Rolls Royce BR710 casing in RZ5. Other aerospace applications include auxiliary gearboxes (F16, Eurofighter 2000, Tornado) in MSR or RZ5, generator housings (A320 Airbus, Tornado and Concorde in MSR or EQ21) and canopies, generally in RZ5.

In motor racing, RZ5 is generally used for gearbox casings although MSR/EQ21 alloys are also being used increasingly due to their superior ambient temperature properties or because of increased operating temperatures. RZ5 wheels have been shown to have significantly better performance than Mg-Al-Zn alloy wheels under arduous racing conditions. Due to the high operating temperature of racing engines, WE54 castings have been used for a variety of Formula 1 engine parts and are used for engine components for a limited edition road car. Forged WE54 pistons offer great future potential for motor racing and other applications will exist for other wrought products. Magnesium alloys are also used in many other engineering applications where having light weight is a significant advantage. Magnesium-zirconium alloys tend to be used in relatively low volume applications where they are processed by sand or investment casting, or wrought products by extrusion or forging. Zirconium-free alloys, principally AZ91 but also other alloys, are used in automotive and various other high volume applications.

Several magnesium alloys have been developed especially for the manufacture of wrought products. The most important are M1A, AZ3IB, AZ6IA, AZ80A, and ZK60A. As in the case of the casting alloys, the principal added elements in the wrought compositions are aluminum, manganese, and zinc.

Magnesium alloys for wrought products are classified as non-heat treatable and heat treatable. AZ80A and ZK60A are heat treated by aging the material as fabricated. The strengths are increased substantially but with loss of elongation on aging. M1A and AZ31B sheet are supplied as hot rolled, as cold rolled, and annealed.